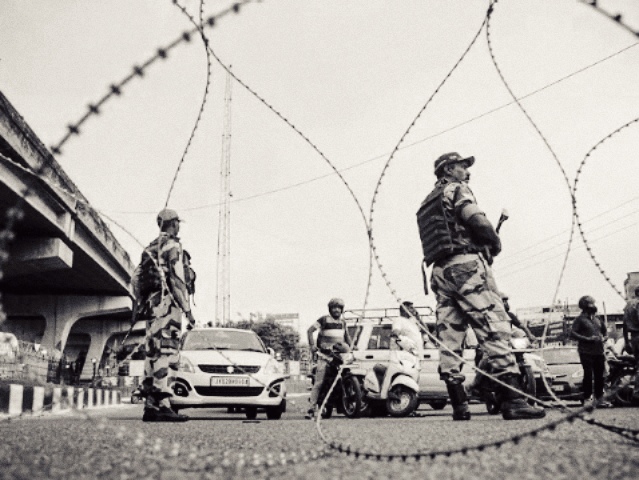 Liberty, equality, fraternity, or death; – the last, much the easiest to bestow, O Guillotine!

Even then, the tale of illegal occupation of Kashmir that began on October 27th, 1947 continues even today as the unilateral unconstitutional act of August 5th, 2019 by New Delhi to abrogate the special status of the Muslim Majority State is being exploited by the Indian Government for a systematic demographic change in Kashmir.

The recent three-day Kashmir visit of Amit Shah to connect with the local extending a hand of “friendship” to the youth is significant as it came at a time when violence caused 38 killings in 20 days of this month – including 11 civilians, 17 rebels and 10 security personnel on one hand, and on the other, the Kashmiri students were booked under terror charges for supporting Pakistan’s Cricket Team.

After August 5th, 2019, this is Amit Shah’s first ever visit to Kashmir. Here, it is notable that Amit Shah has been the one who introduced the bill to abrogate Article 370 in the Indian Parliament two years ago; the very law that ensured the exclusive citizenship rights to the permanent Kashmiri residents barring the outsiders from buying or selling permanent settlements.

With the emergent themes of geoeconomics in the region, Kashmir being the nuclear flashpoint between Pakistan and India has become central to the regional equation of power. Geoeconomics, a term, initially introduced in the post-Cold War context by a United States strategic scholar Edward Luttwak in 1990, being a form of statecraft has now been employed as an “admixture of the logic of war with the methods of commerce”. This can be considered in terms of Amit Shah’s recent visit to Kashmir as reportedly not only the Indian Government is deploying 6000-acre existing land bank to attract investors, Sajjan Jindal’s JSW Steel has also announced a Rs 150 Crore project at Lassipora, Pulwama. In addition, on October 18th, 2021 an agreement for investment in infrastructure has also been signed between Dubai and the Indian Government.

Moreover, Pakistan’s foreign policy shift toward geoeconomics earlier in 2021 can also be viewed in terms of the emergent threat matrix in the region centralizing the economic security. Coupled with China’s Belt and Road Initiative, Pakistan’s geoeconomics vision centers on regional connectivity and the collective pursuit for sustainable development. In order to encourage the regional environment for peace and stability minimizing the role of Indian state sponsored proxies waging war on Pakistan via western borders, Pakistan during the Islamabad Security Dialogue has proposed a conditionalized regional trade facilitation for India – based on the peaceful conflict resolution of Kashmir.

The reason that Kashmir is a disputed territory, the Modi Government selling the narrative of ‘Kashmir and Article 370 abrogation’ as an ‘internal matter’, securitizing development for a demographic change is demonstrative of RSS ideology for ‘United India’ in practice.

This can be further ascertained in view of the appointment of Manoj Sinha as the Lieutenant Governor of Jammu and Kashmir; a seasoned politician from Utter Pradesh, a close acquaintance of Modi’s and a strong proponent of Hinduization values. In parallel, the Modi Government has also launched an economic snapshot and vision statement 2030; a framework to convert a demographic majority into a political minority as the reliance of this economic outlay in Juammu and Kashmir is expected to be on the Hindu-migrant businesses.

Considering the recent developments, it can be observed that in the past two years, the spirit of freedom and the right to self determination in Kashmir has only been revitalized.

October 27th, 1947 has been in violation of the Independence Act and the Partition Plan of 1947. Also, New Delhi has been violating the Human Rights conventions since then. Today, Kashmir has become the litmus test for the international rule-based world order established by the United Nations. The constant violation of international norms must come to an end as Kashmiri lives matter!

Indo-Iran Evolving Ties, Rise of Taliban and The Region